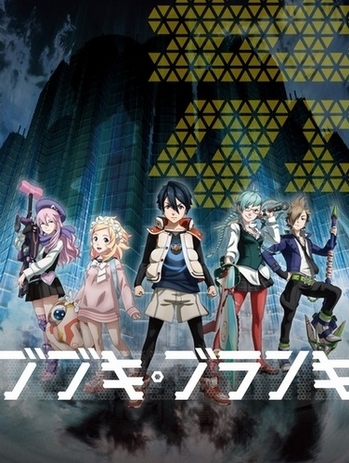 When he was a little boy, Azuma Kazuki lived on a flying island with his mother Migiwa, his father, and his younger twin sister ... and a lot of mechanical golem monsters, called Buranki, most of which were "asleep" and motionless. As a witch, Migiwa Kazuki had made it her mission to keep the Buranki of the island from awakening, but when they started to wake up in spite of that, Migiwa and her husband chose to send their children to the surface of the Earth below, so they could at least grow up safely.

Ten years later, Azuma returned to Tokyo, the city where he and his sister landed, to discover that the city has become a dystopian warzone. Reoko Banryuu has become the de facto ruler of the city with the power of her Buranki, Entei, while most other Bubuki-users are hunted by a special police force - and Azuma is on their list of targets. His childhood friend, a girl named Kogane, shows up to whisk Azuma away from the clutches of the police, and as her Bubuki-wielding friends gather around Azuma, the witch's son is plunged into the thick of the fight against Reoko's tyranny ...

. Director Daizen Komatsuda previously worked on a number of Gainax/Trigger properties such as Dead Leaves, Tengen Toppa Gurren Lagann, Kill la Kill, and Panty & Stocking with Garterbelt, and brings much of the same frenetic goofiness to this show.

The second season, subtitled Hoshi no Kyojin (and officially translated as The Gentle Giants of the Galaxy), began airing in the Fall 2016 Anime season; besides bringing Azuma's sister Kaoruko back into the spotlight, it introduces more of the backstory behind the different international Buranki teams, as well as deepening the conspiracies hinted at in the first season.

Bubuki/Buranki is built with the following tropes: