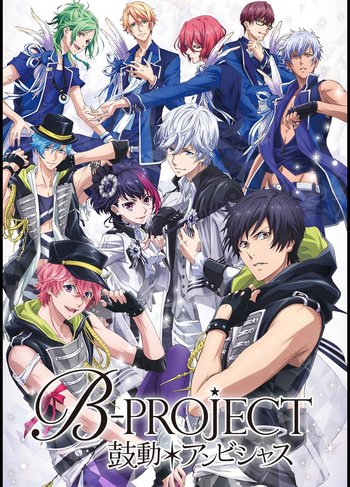 In a certain company, in a certain time, 3 groups emerged as idols: the elegant duo Kitakore, the clashing THRiVE, and the light and poppy MooNs. These three groups and ten boys were the result of the B Project— shortened for "Bambi Project", they were trained since childhood to become the best idols they could be. But do they have what it takes to reach the top?

B-Project is a multimedia franchise by LOVE&ART and MAGES., produced by Chiyomaru Shikura with designs by Utako Yukihiro (of Devils and Realist fame). Beginning in 2015, it consists of multiple CDs, a video game, a stage play, a spinoff manga and an anime series that aired in 2016 titled B-Project: Koudou Ambitious. This particular page will be focusing on the anime series.

Here, we're introduced to the Project through the eyes of the new A&R department hire, Tsubasa Sumisora, and follow her through her attempts to assist the boys in their various idol activities. Accompanied by their manager Yashamaru, they get through the ins and outs of the business and mostly light-hearted adventures. Emphasis on the mostly.

2017 announced a second season, Zeccho Emotion, for the anime, introducing the 4-man group KILLER KING to the anime's lineup after appearing later in the overall franchise. The new season premiered in Winter 2019. A third season is set for 2021. It's also been announced that a Switch and phone game will be released sometime during the year.