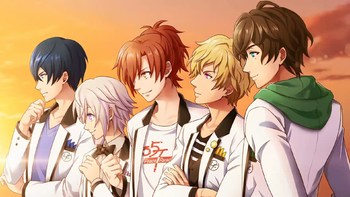 Dream Festival! is an Idol Genre Japanese multimedia franchise developed by the music label Lantis and Bandai Namco and in late 2015. DearDream's debut single was released in March 2016 followed by more music CDs, live performances by the voice actors, a mobile app, an arcade game and an anime in September 2016 produced by Bandai Namco Pictures.

The story follows Kanade Amamiya, a second year in high school who has suddenly been scouted by Haruto Mikami, a legendary idol from D-Four Productions. Despite his initial reservations, he decides to audition and ends up being accepted into D-Four's Rookie Idol division, where everyone has the same goal: to make their CD debut by winning the agency's competition Dream Festival! Of course, he can't do it alone. Only a strong unit will be able to win DreamFes! and Kanade is hoping to find friends among his fellow rookie idols.

The anime received a second season in 2017, titled Dream Festival! R. This season introduces the three man idol group ACE as an older group to the lineup, and follows both DearDream and KUROFUNE as they rise in stardom.

Following the ending of R, both the arcade and mobile video games ended by May 2018, with in-game transactions ending in March. The two groups DearDream and KUROFUNE held their final live concert "ALL FOR TOMORROW!!!!!!!" at Nippon Budokan in late October 2018. However, the characters themselves won't be dying just yet; they still hold 3D concerts despite the franchise winding down.

Not to be confused with the "Dream Festival" event from Ensemble Stars!.