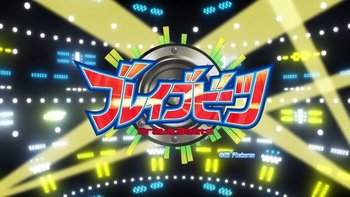 Brave Beats (ブレイブビーツ Bureibu Bītsu?) is a Japanese anime television series produced by BN Pictures and Ajiadonote with further assistance from DR Movie, Asahi Production (who also handed CG duties) and Studio Add, like Tribe Cool Crew before it. It ran from October 11, 2015 to March 27, 2016.

Hibiki Kazaguruma, a sixth grader, meets an amusing little robot named Breakin while coming home from school one day. Breakin, a dancer from an alternate-dimension dance world, challenged the King of Dance for the throne and lost. He has been deprived of Dance Stones (the stones of dance power) and sent to the human world. To restore his power, Breakin must collect all the Dance Stones scattered around Earth.

One problem though...Hibiki isn't into dancing.