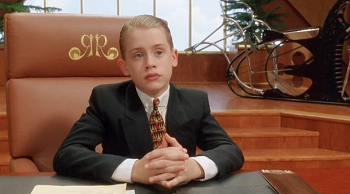 A very simple trope. One of the top officers of the Mega-Corp happens to be far younger than should be permissible. Examples should be younger than 17 years old, which is just young enough that it seems implausible. Often the age is justified by the fact that their parents owned the controlling interest in the company, so ownership of it fell to them upon their death.

This is only possible under Artistic License – Law where the setting is Like Reality, Unless Noted, as minors (especially those under the age of 12) in most developed nations cannot sign contracts or hold employment. When a parent dies, leaving control of major assets to their child or children, a Trust or Conservatorship is created to manage the assets and look after the best interests of the child. Or, at least, it's supposed to...

Subtrope of Improbable Age. Related to A Child Shall Lead Them, where the kid is the ruler of a country. (The two may overlap if the company is an N.G.O. Superpower.) May overlap with Adorably Precocious Child.