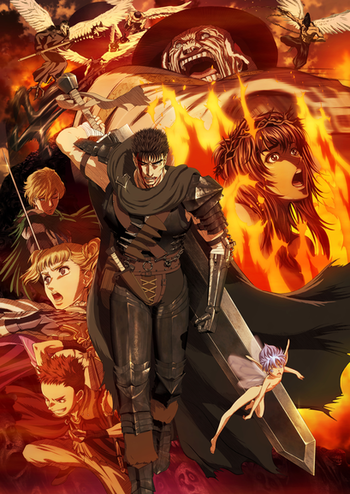 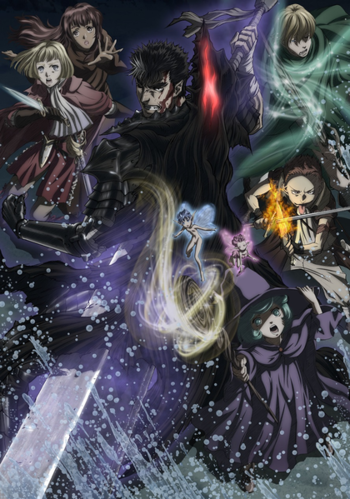 for second key visual.
Mozgus: Can you not hear those voices praying? All of those here, right now, have made their hearts one, praying for salvation. Are you saying you do not care if the lives of the thousands of true believers are sacrificed in exchange for that evil witch's life?
Guts: Shut the hell up. All they do is pray. When they're in trouble, all they do is try to save themselves... Those tens of thousands of people don't have the right to depend on a single woman!
Advertisement:

Berserk is a 2016 TV anime adaptation of the popular and long-running Dark Fantasy manga Berserk by Kentaro Miura, which focuses on the grim Anti-Hero Guts as he quests for Revenge against his treacherous former best friend Griffith and The Legions of Hell that he commands. The two previous animated adaptations, the OLM Incorporated 1997-98 TV anime Kenpuu Denki Berserk and the 2012-13 movie trilogy Berserk: The Golden Age Arc by Studio 4°C, both focused on the manga's famous "Golden Age Arc". Unless you count the 1999 and 2004 licensed games by Yuke's, this is the first adaptation that depicts Guts as the Black Swordsman and serves as a sequel to the Golden Age Arc. Warning: This description contains Late Arrival Spoilers for those who haven't read the Golden Age Arc!

After being the only members of the Band of the Hawk to escape from the horror of the Eclipse, which cost Guts an eye and his left hand, and Casca her sanity, Guts girded on the Dragon Slayer and left her with Godo the blacksmith to pursue revenge against Griffith, the God Hand, and the Apostles as the Black Swordsman. Haunted every night by hungry ghosts trying to take his soul, Guts hunts the monsters called Apostles with only the company of a little elf named Puck, who joins him along the way and tries to act as his conscience. However, he is being pursued by the Holy Iron Chain Knights, a military force of the Church investigating an apocalyptic prophecy who suspect him of being a servant of evil. They are led by Farnese, an emotionally unstable noblewoman who uses religion to hide from her fears and self-loathing. At her side is Serpico, a Servile Snarker who is deadlier than he appears. Guts escapes from a brief period of capture, and follows a bad premonition back to Godo, who tells him that Casca has escaped on her own and may be in mortal danger. Realizing that he has one last chance to redeem himself, Guts follows her trail to the refugee camp outside the monastary of St. Albion, where displaced masses are being persecuted by the fanatical inquisitor Bishop Mozgus in his hunt for heretics. With the help of a brash Artful Dodger named Isidro and a couple of good Samaritans, Guts races to save Casca as the dark forces lurking beneath St. Albion begin to take form and engulf tens of thousands of souls in a desperate struggle for survival.

Directed by Shin Itagaki and produced by Liden Films, it is animated in a hybrid of 2D and 3D animation with 3D by Studio GEMBA and 2D by Millepensee. Miura himself was the show's executive supervisor involved in all aspects of production, including writing an original scenario for episode 3. Most of the Japanese voice actors from the movie trilogy return to their characters, joined by additional voices for newly introduced characters, and Unshō Ishizuka reprises his 1997 anime role as The Narrator. The music includes an OST by movie trilogy composer Shiro Sagisu, opening song Inferno performed by 9mm Parabellum Bullet, insert song Hai Yo (Oh Ashes) performed by 1997 anime composer Susumu Hirasawa, and ending theme Meimoku no Kanata (Behind Closed Eyes) performed by Nagi Yanagi. An English dub was provided by Bang Zoom! Entertainment, and the whole show is legally available here

Character tropes should go to the character pages.