Too Hot for TV 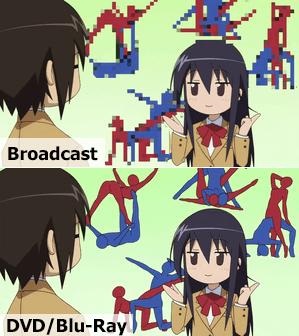 You know you have a dirty mind when your Imagine Spots are censored!
Material that won't fly past censors on TV and is too blatant to sneak past the censors, so it's included on video releases, often in the DVD Bonus Content. It can be used as marketing ploy to sell more DVDs.
Advertisement:

Many ecchi anime that use censor steam will remove it for the DVD release. This also applies to violent anime with censor shadows.

So named because in 1990s, there were TV shows that sold VHS releases called "Show X: Too Hot for TV!". In reality, the "too hot" was often restricted to a few extra swear words.

A Sub-Trope of Deleted Scene. Compare Unrated Edition, Think of the Censors!, Explicit Content, Too Sexy for This Timeslot.