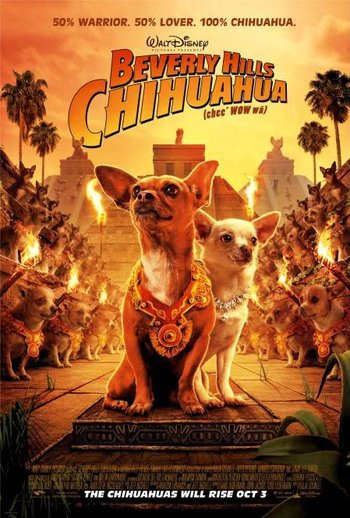 Beverly Hills Chihuahua is a 2008 live-action Disney family comedy film about Chloe (Drew Barrymore), a pampered pet chihuahua living in Beverly Hills. When Chloe is left in the hands of her owner's irresponsible niece, however, a Mexican vacation turns into a four-alarm dognapping. Now, Chloe has to find her way home while her love-struck landscaper, Papi (George Lopez) sets out to rescue her. The movie also features the voice talents of Andy Garcia and Edward James Olmos, as well as Jamie Lee Curtis as Vivian Ashe and Piper Perabo as her niece, Rachel.

The third film provides examples of: