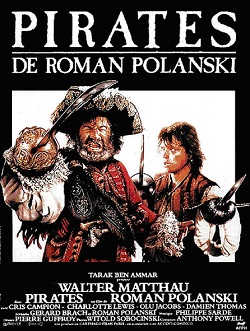 Pirates is a 1986 Franco-Tunisian adventure film directed and written by Roman Polański. It stars Walter Matthau, Cris Campion, Damien Thomas, Olu Jacobs and Charlotte Lewis. It was screened out of competition at the 1986 Cannes Film Festival.

In 1659, the pirate Captain Thomas Bartholomew Red is stranded aboard a raft at sea with Jean-Baptiste, his French first mate (nicknamed "Frog"). After Red, cracking under the starvation, tries to kill and eat Frog, the duo crosses the path of a Spanish galleon, climbs onboard and are forced into slavery before instigating a mutiny with the other prisoners and taking control of the vessel. Frog falls in love with María-Dolores de la Jenya de la Calde, the niece of the governor of a Spanish colony. Red covets the golden throne that the Spanish have taken from an Aztec king. The two undertake an Indy Ploy while fighting the Spaniards to get what they want: one of them succeeds. Sort of.

Despite being a Box Office Bomb, it earned an Academy Award nomination for Best Costume Design.