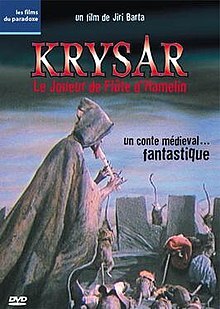 Krysar ("The Pied Piper") is a 1986 Czechoslovakian animated dark fantasy film that was directed by Jiří Barta and is an adaptation of the classic fairy tale The Pied Piper of Hamelin.

The film starts off with the townspeople of Hamelin doing their daily chores, while showing the audience just how petty and greedy the people are. One day however, the people ended up wasting so much food and items, that a rat infestation takes place at night and the rats ended up taking over the town of Hamelin. It was then that the Pied Piper himself comes into town and the town leaders offered the Pied Piper 1,000 gold coins as payment if he gets rid of the rats. The Pied Piper accepts the payment and he starts playing his flute that ended up causing the rats to follow him out of town and jump into the lake at the edge of the city where they all drowned.

This film was notable for being a much Darker and Edgier adaptation of the classic fairy tale.

The full movie can be found here.