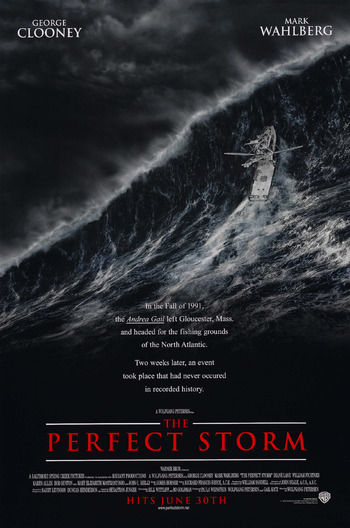 "FOR CHRIST SAKE! YOU'RE STEAMING INTO A BOMB!"
"Wait, what if... what if Hurricane Grace runs smack into it? Add to the scenario this baby off Sable Island, scrounging for energy. She'll start feeding off both the Canadian cold front...and Hurricane Grace. You could be a meteorologist all your life and never see something like this. It would be a disaster of epic proportions. It would be... the perfect storm."
— Todd Gross
Advertisement:

The Perfect Storm is a 2000 Disaster Movie, directed by Wolfgang Petersen and adapted from the nonfiction book of the same name by Sebastian Junger, which dramatizes the "Perfect Storm" that hit the Atlantic coast of North America in October 1991, and speculates on the fate of the crew of the Andrea Gail, a fishing boat based out of Gloucester, Massachusetts, that was lost in the tempest. It stars George Clooney, Mark Wahlberg, William Fichtner, John C. Reilly, Allen Payne, John Hawkes, Diane Lane, Michael Ironside, Karen Allen, Mary Elizabeth Mastrantonio, Bob Gunton, and Cherry Jones.

In September 1991, the Andrea Gail returns to port with a poor catch, leading Capt. Billy Tyne to take the boat out for one final fishing run, heading out past their usual fishing grounds. However, when their ice machine breaks, they must hurry back to shore in order to preserve their catch, but they discover that between them and safe harbor lurks a confluence of two weather fronts and a hurricane, creating the eponymous Perfect Storm. Caught in the teeth of the storm, the crew is forced to fight for their lives and for their only chance to get home...

Another vessel, the private yacht Mistral, gets caught in Hurricane Grace and a helicopter runs out of fuel looking for the Andrea Gail, which leads to a harrowing rescue by the Coast Guard.

The Perfect Storm contains examples of:

"They say swordboatmen suffer from a lack of dreams, that's what begets their courage."