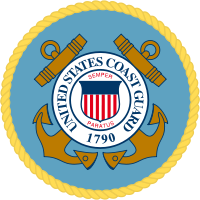 "You have to go out, but you don't have to come back."
Advertisement:

The United States Coast Guard is one of the nation's Armed Forces, right up there with The Army, The Navy, The Air Force, and The Marines. Despite this, most people forget that it even exists. Or for most of its history, people mistook them for the Navy after being rescued at sea.note The distinctive "white hull with red and blue bow stripes" paintjob on their ships was adopted specifically to make Coast Guard ships easily distinguishable from Navy ships...and other nations' Coast Guards have responded by adopting similar designs. Part of that is its small size: with 42,000 active duty members, it is less than a quarter the size of the Marine Corps.

They've fought in every war of the United States since 1790, but their rescue and law enforcement roles and their shuffling around some decidedly nonmilitary Departments leads to frequent accusations that they're "not military." Given that, their small size, their constant workload, and their status as "shallow water sailors," the Coast Guard has a longstanding, mostly friendly rivalry with the Navy, wherein Coast Guardsmen like to boast that they're better, tougher sailors than the Squids could dream of.

This being America, despite the Coast Guard's small size compared to the other military branches, it is still larger than many nation's navies and operates more ships. The Legend-class National Security Cutters, for instance, are larger and better armed than some second and third world frigates and destroyers. Of course, the USA needs a bit more oomf to its Coast Guard, considering the USCG has to police and protect the world's largest exclusive economic zone, all 11,351,000 square kilometers of it.

If you ask a Coast Guardsman, they might tell you that they belong to the oldest continually operating US sea service. The US Navy and Marine Corps— as opposed to the Continental Navy and Marines— were both formed in 1794, four years after the Revenue-Marine was founded. The Revenue-Marine, after several name changes and agglomerations with other services, became the modern Coast Guard.

Coasties are also more than happy to tell you that they're ALWAYS in the fight. When the Navy and the Marines are putzing around bases with their hands on their cocks waiting for the next war, Coast Guardsmen are out there saving lives, catching crooks, keeping the waterways safe, and protecting the environment. There's also the running joke that when the Air Force is afraid to fly in the weather, they send out the Navy, and the Coast Guard gets sent out when the Navy is afraid to fly.

When wars do come, Coast Guardsmen have been there ever since 1790. They are that hard nucleus of seagoing professionals around which the Navy forms in times of war, serving as additional manpower and fulfilling variations on their peacetime roles— such as handling small boats or intercepting the same. Many of the American landing craft used in World War II were operated by the Coast Guard, with one Guardsman, Douglas Albert Munro

, earning the Medal of Honor during the Battle of Guadalcanal when he died while evacuating a group of Marines pinned down on a beachnote His last words: "Did they get off?". Today, cutters are forward-deployed today in support of counterpiracy efforts in the Gulf of Aden and the Iraq and Afghanistan Wars; and Port Security Units are tasked with defending far-off oil terminals.

The official Coast Guard marching song is "Semper Paratus"note Latin for "Always Ready", which conforms to the Common Meter, and can thus be sung to the tune of "The Ballad of Gilligan's Island".

Beginning in the 1980s, the Coast Guard's role in drug interdiction took on renewed importance. Today, much of the public perceives that as the Coast Guard's main role, with the help of many other organizations and the Navy.

By law, the Coast Guard has 11 missions (listed in order of percentage of operating expenses)

Coast Guard vessels range from small, fast 29' Response Boat Smalls, through 47-foot "self-righting" Motor Life Boats, to 378' High Endurance Cutters and 420' icebreakers, with a wide range of patrol boats, tugs, and buoy tenders in between. The Coast Guard fleet is divided into three categories based on the color of the ships — "white hulls", consisting of the USCG's combat/interdiction craft, "black hulls", consisting of maintenance and support vessels like buoy tenders, and "red hull" icebreakers. They also have a wide range of fixed- and rotary-wing aircraft. Interestingly enough, the Coast Guard can also boast to have the only active commissioned sailing vessel in the American armed forces, the USCGC Eagle

, built in Germany in 1936 and seized after the war, which now operates as a training and public relations vessel.