Literature / Island in the Sea of Time 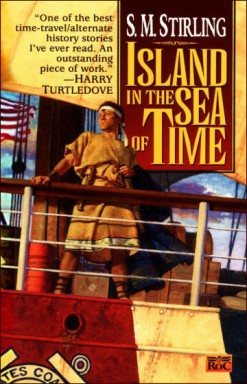 The first book of the main trilogy of the Island in the Sea of Time (Series) by S.M. Stirling, in which the entire island of Nantucket is sent back in time to the late Bronze Age by a mysterious dome of light. "The Event" also brings along the Eagle, a Coast Guard training vessel—a mixed blessing for Nantucket, for while the ship and its crew prove invaluable in saving the island from starvation, one of the officers, William Walker gathers a band of followers and hijacks a ship for England, where he sets himself up as a warlord among the Indo-European tribes of the area. For obvious reasons, the people of Nantucket are not pleased with this, and the Town Meeting, under the leadership of former police chief Jared Cofflin and Marian Alston, captain of the Eagle, sends a force after him.

This first book, Island in the Sea of Time, covers the first couple of years, from the Event up to the Battle of the Downs, where Walker and his local allies meet the expeditionary force from Nantucket and their local allies.

This book is followed by Against the Tide of Years.

Island in the Sea of Time provides examples of: