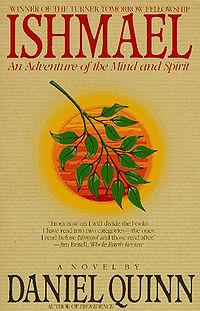 Ishmael is a philosophical novel written by Daniel Quinn and published in 1992. The book begins with our narrator finding an ad in the paper that states:

TEACHER SEEKS PUPIL.
Must have an earnest desire to save the world.
Apply in person.

Jaded by the lack of change that occurred during the 60s, the narrator answers this ad to confront this so-called teacher, and ends up learning about just how the world works.

This novel is the first in a trilogy that includes My Ishmael and The Story of B.

Not to be confused with the Star Trek novel Ishmael (1985).