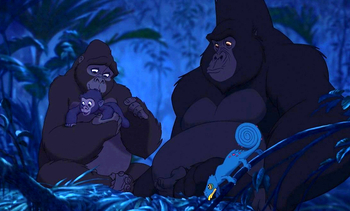 Gorillas are often (or rather, used to be) depicted as ravenous, dangerous beasts and stock monsters for heroes to fight. As time has gone on and primatology has advanced, it's been generally understood that gorillas are considerably nicer than many other primates, particularly chimpanzees and baboons, are almost exclusively herbivorous, and generally avoid violence in most circumstances. In response to this, many writers, especially in recent years, have presented gorillas in a more sympathetic light, demonstrating them to be placid creatures. This being said, they're still usually depicted as willing to throw down in order to protect themselves, their friends, or their family. Often, fictional gorillas initially appear threatening, but calm down and become this trope after realizing that their percieved opponents mean no harm.

Contrast this trope to Killer Gorilla, which it was created to challenge. This trope is also a Sub-Trope of Gentle Giant. See also Intelligent Primate, since friendly gorillas also have a tendency to be shown as intelligent.

Mostly Truth in Television, as gorillas are among the least aggressive primates and will leave humans alone unless they feel directly threatened. Friendlier examples of a King Kong Copy can qualify for this trope. Compare Big-Hearted Bigfoot, another example of a large but friendly hairy hominid, and Erudite Orangutan, a smart and usually friendly ape. For tropes about other large, gentle herbivores, see also Genial Giraffe and Honorable Elephant.