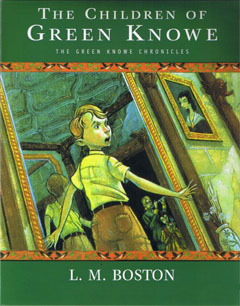 The Green Knowe Chronicles are a series of six books by author Lucy M. Boston. These books tell the story of the adventures of a British boy, Tolly, and some other children, who visit the eponymous estate, a Norman manor house where the line between the past and the present, between the living and the dead, and between reality and fantasy, is blurred.

The novels are as follows:

In The Children of Green Knowe, Tolly first arrives at the castle, called Green Noah here, and gradually learns that all is not as it seems as he learns to fit in.

In The Chimneys of Green Knowe, published in the United States under the title The Treasure of Green Knowe, Tolly hears the story of an ancestor from the turn of the nineteenth century, uncovering secrets to save Green Knowe.

In The River of Green Knowe, the estate is being rented for the summer by two old ladies, Dr. Biggin and Miss Bun. Dr. Biggin invites her niece, Ida, and two refugee children, Oskar and Ping, to stay at the castle for the summer. The children have many adventures along the nearby river.

In A Stranger at Green Knowe, Ping returns to the castle for another adventure. A gorilla, escaped from the zoo, has found its way to Green Knowe, and Ping seeks to hide it from the authorities.

In An Enemy at Green Knowe, Ping and Tolly meet, as the tale of an alchemist leads to a visit from a woman claiming to be a historian. However, this woman is not what she seems, and it quickly becomes clear that evil forces are at work.

The Stones of Green Knowe tells the story of how it all began, as Green Knowe is built a half-century after the Norman Conquest, and Roger d'Aulneaux, the lord's son, is the first to discover its secrets.

Children was adapted by The BBC in 1986 and Chimneys/Treasure was made into a film in 2009.