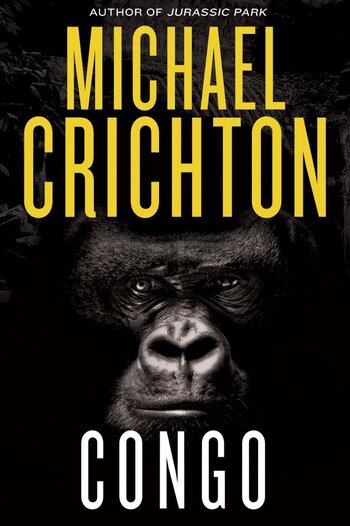 Congo is a 1980 science fiction novel by Michael Crichton, who admitted he was trying to remake King Solomon's Mines.

The novel starts with an abrupt end to an expedition sent by Earth Resource Technology Services Inc. in the dense rain forests of Congo when the team is attacked and killed by an unknown creature and all contact with them is lost. The expedition, searching for deposits of valuable diamonds, discovered the legendary lost city of Zinj (in Arabic "Zinj" or "Zanj" refers to the southern part of the East African coast). A video image taken by a camera there, and transmitted by satellite to the base station in Houston, shows a peculiar race of grey haired gorillas, to be responsible for the murders.

Another expedition, led by Karen Ross, is launched to find out the truth and to find the city of Zinj, where there are believed to be deposits of a certain diamond, type IIb, which are naturally boron-doped and thus useful as semiconductors, though worthless as gemstones. This time the searchers bring along the famous White African mercenary Munro, as well as a female gorilla named Amy, who has been trained to communicate with humans using sign language, and her trainer Peter Elliot. Time is of the greatest essence, as a rival consortium of Japan, Germany, and Holland has also set off into the jungle after the diamonds, turning the entire expedition into a race to the city of Zinj. Unfortunately for Ross and her team, the American expedition encounters many delays along the way, including plane crashes, native civil wars, and jungle predators.

A film adaptation was released in 1995.