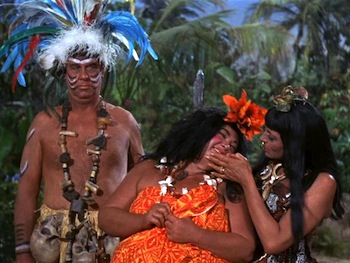 "...when people like Mrs. Whitlow use this term they are not, for some inexplicable reason, trying to suggest that the subjects have a rich oral tradition, a complex system of tribal rights and a deep respect for the spirits of their ancestors. They are implying the kind of behaviour more generally associated, oddly enough, with people wearing a full suit of clothes, often with the same sort of insignia."
— Terry Pratchett, on "savages," The Last Continent

Quite simply, this trope is the (hopefully) now-discredited stereotypical depiction of "natives" in a Hungry Jungle, Deserted Island, or other such unsettled wilderness. The locals will inevitably be portrayed as culturally "inferior" to the main characters — typical depictions will show the (usually dark-skinned) natives as unkempt and scantily clad, decorated with Tribal Face Paint and Savage Piercings, and brandishing spears or bows. When they meet the protagonists, they will either be mesmerized by the Mighty Whitey and accept them as gods, have the heroes for lunch, or invite them to be guests of the volcano god. They often have one woman among them, The Chief's Daughter, who looks more attractive by Western standards than the rest of her people, and falls in love with the Mighty Whitey protagonist. If they can speak the protagonists' language, expect lots of You No Take Candle.

A variation comes up with stereotypical depictions of American Indians in Injun Country — the approach is the same, and the only difference will be in the superficial details. They will wear Braids, Beads and Buckskins, speak using Tonto Talk, and add tomahawks to their arsenal. Their camps will be filled with Tipis and Totem Poles, they greet other people with a gruff "How," the chief will wear a giant feather headdress, and the elders will sit around a big bonfire for a "pow-wow." If they befriend the protagonists, a Peace Pipe will probably be smoked, and maybe the heroes will end up being honorary chiefs of the tribe.

Needless to say, when any of these folks appear, Unfortunate Implications will be quick to follow.

While this was a popular depiction in the past, it's largely a Dead Horse Trope now, due to the aforementioned Unfortunate Implications. If and when this trope appears in modern works, it's often subverted and played for laughs; straight depictions in mainstream Western culture are sure to raise eyebrows or risk quite a backlash.

A meta-trope to Captured by Cannibals, Hollywood Voodoo, Chased by Angry Natives, Stewed Alive, and many others. A supertrope to The Savage Indian, Cannibal Tribe, and The Natives Are Restless. Contrast with Noble Savage and Magical Native American, which glamorizes the locals instead of denigrating them.

Not to Be Confused with people growing up near Los Angeles.