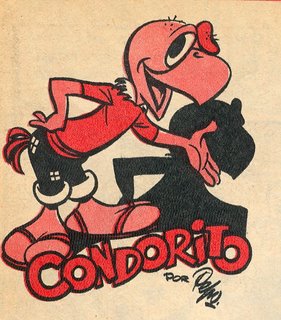 Condorito is a Chilean comic book created by the cartoonist René Ríos, better known as "Pepo".

Its main character is an anthropomorphic condor living in a fictitious town named Pelotillehue — with the characteristics of any small Chilean town. Condorito is meant to be a representation of the lower-class Chilean people: somewhat irresponsible and always ready to party around, but also kind, friendly, savvy and loyal to his friends and loved ones.

The comic debuted in 1949 in the first issue of "Okey", a weekly anthology comics magazine in the form of one-page stories. In 1955, a compilation of Condorito's adventures was published as an independent comic book. From that moment on, Condorito had gained his own comic book, which is still published on a bi-weekly basis. Some of the Condorito comics have been republished for students of Spanish as a second language

During the 1980s, the comic became so popular it got its own Animated Adaptation, a growing set of merchandising and even a comic strip adaptation for American newspapers. It also has an on-going series of 3D-animated shorts in the official YouTube channel. An All-CGI Cartoon feature premiered in Latin America at October 2017. You can read about Condorito's animated versions here.

After René Rios' death in 2000, a small team of writers and artists took over penning the stories, but without Rios' supervision, the results have been lukewarm at best.

Be prepared to find many dead horse tropes, mainly due to Values Dissonance, or just plain old racism and sexism.