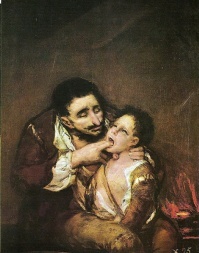 Before the blind man could withdraw his long nose that was choking Lazarillo, his stomach revolted and discharged the stolen goods in his face, so that his nose and that hastily-chewed sausage left his mouth at the same time
Advertisement:

Picaresque is a genre of usually satiric prose fiction originating in Spain and depicting in realistic, often humorous detail the adventures of a roguish hero of low social degree living by his or her wits in a corrupt society.

A traditional picaresque is often a "Shaggy Dog" Story and/or has a Random Events Plot. Elements of the picaresque frequently show up in Cyberpunk stories. The plots are often episodic, and there's very little in the vein of a main quest narrative, and as such most picaresque narratives usually have a few stock characters who weave in and weave out.