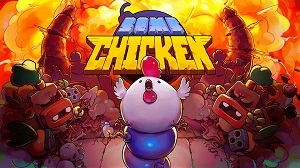 Developed by Nitrome, Bomb Chicken is a 2018 puzzle-platformer for Nintendo Switch and Steam. Its titular character is a chicken that, following a freak accident, develops an ability to lay bombs instead of eggs. Newfound ability in hand, Bomb Chicken sets out on a quest to stop the antics of fast-food chicken chain BFC.

Gameplay-wise, the main premise of Bomb Chicken is solving platform-game challenges without being able to jump. You can lay multiple bombs in order to reach high platforms or get over obstacles, kick bombs to trip switches or kill enemies, and much more...but all of it comes with a risk. Your bombs can blow up most enemies in the game, but they're just as good at blowing you up.

Works relating to this trope include: