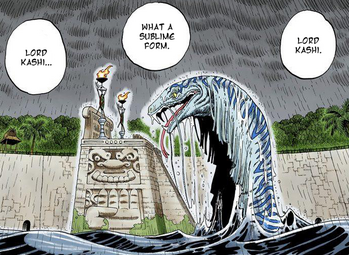 "The ancient scrolls say it's a white boar the size of a mountain!! That's what they call the Mountain God!!"
— Denjiro, One Piece
Advertisement:

A mostly adventure story trope, where a primitive tribe worships a giant animal as a god or otherworldly entity, leaving it sacrifices of food (and occasionally humans). The animal itself is rarely sapient, only learning that food regularly appears in a specific part of its territory if it leaves the humans alone. This makes the tribe appear even more primitive as the object of their tribute is a mere representation of nature's power which they feel helpless against and thus deify.

Compare Appease the Volcano God and Fed to the Beast.