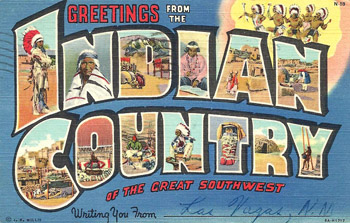 At least they spelled it right.
"...the god promised that if she stayed with him in the cave he'd forgive her people, and protect and enchant their land until the end of time. So she agreed to live with the god in the waterfall and became Maid of the Mist. And thanks to the princess, Niagara has remained an enchanted wonderland, despite hundreds of years of commercial development."
— Jaye, Wonderfalls
Advertisement:

This is a Setting that broadly covers the locations where Indigenous Americans (also First Nations) can be found. Has nothing to do with the actual country of India although works set during The Raj sometimes have a similar dynamic with hinterland India.

Unlike other settings, there is no common physical aspect to this trope, as Real Life Indigenous Americans are diverse groups that have lived in a variety of places, such as the lush forests of the Appalachian Highlands, the semi-arid flatlands of the Great Plains, and the Intermontane Plateaus of the west. Instead, Injun Country as used in media is a state of mind — a place where the normal rules of the Civilized World do not apply, broached only by those daring enough to venture into the unknown.

The characterization of Injun Country has changed over the years. It began as a staple of The Western and tabloid entertainment, where American expansion brought white settlers into conflict with natives in The Wild West. In these works, the Native Americans were depicted as Hollywood Natives or bloodthirsty savages, with a "primitive" lifestyle and the ever-present threat of a scalping. Sympathetic Indigenous characters were almost always honorable brave collaborators with whites, while "Half-Breed" characters could go either way.

Today's portrayals of Injun Country have changed due to Values Dissonance. While the landscape remains the same, frequently such revisionist works will depict the natives as earthy Noble Savages or Magical Native Americans who lived in an Edenic utopia before the White Man's arrival tore it all down. Though the Natives usually remained a threat to the heroes, they also acknowledge the injustices of the settlers.

An emerging variation can also be seen in present-day works set on modern native reservations, The Rez, which are often shown as an awkward mix of lavish casinos and abject poverty. The contrast has become fodder for comedy and satire, and also leading to new character types, such as opportunistic Indian hucksters dazzling gullible visitors with fake rituals and spurious wisdom.

A supertrope to Tipis and Totem Poles and The Rez. Depending on the work, may overlap with Settling the Frontier, The Wild West, Hollywood Natives, The Savage Indian, and Magical Native American.