Film / The Outlaws IS Coming! 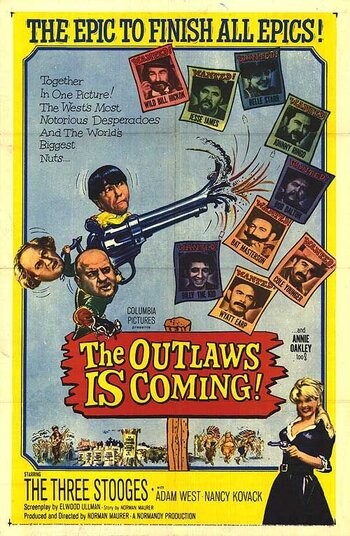 The Outlaws IS Coming! is a 1966 comedy Western film directed by Norman Maurer and starring The Three Stooges in their sixth and final big-screen release following their 1959 resurgence in popularity. By this time, the trio consisted of Moe Howard, Larry Fine, and Joe DeRita (dubbed "Curly Joe"). The supporting cast includes Adam West, Nancy Kovack, Henry Gibson, and Emil Sitka, the latter in three roles.

Larry, Moe, and Curly Joe work as assistants to Kenneth Cabot; an editor at a Boston wildlife conservation magazine. They make such a mess of the pressroom that their publisher gets rid of them by sending them out west to stop the slaughter of buffalo. Upon their arrival they find themselves being sought after by every notorious gunslinger in history, including Wyatt Earp, Wild Bill Hickcock, and Jesse James. Luckily, pistol-packing Annie Oakley, who has fallen in love with the handsome Cabot, agrees to protect them against the bad guys.

The Tropes IS Coming!: