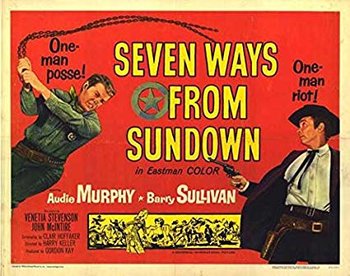 Seven Ways from Sundown is a 1960 American Western film directed by Harry Keller and starring Audie Murphy and Barry Sullivan.

Seven Jones (Murphy), is a young Texas Ranger on his first assignment, assigned to bring in the outlaw Jim Flood (Sullivan) well known for his flashy lifestyle. Despite his inexperience Seven manages to capture the outlaw, but finds his efforts to bring his prisoner to jail complicated by people who for various reasons are out to kill him, and other people who consider Flood to be a hero and want to rescue him.