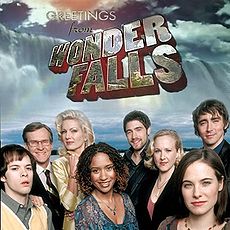 Jaye Tyler (Caroline Dhavernas) is a young woman with a useless Ivy League degree and no desire to pursue a career, working as a retail clerk in a Niagara Falls souvenir shop. Magic Realism asserts itself when inanimate objects—everything from statues, bookends and plush dolls to cartoon business logos, but always animals in some form—begin to talk to her. Their cryptic clues lead Jaye to bettering the lives of people around her (usually in cleverly-conceived, indirect ways) while simultaneously causing her to seriously doubt her sanity. Worse, if she attempts to ignore their commands, they badger and pester her until she relents.

To her aging post-yuppie parents, her closeted lesbian overachieving sister, and her atheist theology-grad-student brother, she is undergoing a stress-related psychotic episode. Despite Jaye's apparent life of Dismotivation (dead-end retail job, trailer-park home, vintage clunker car), they would rather believe stress is the cause rather than the effect of her episodes. Her best friend and confidante merely believes that Jaye will tell her the truth about whatever is wrong when she's ready, rather than accept the actual truth that Jaye has already disclosed. Additionally, relationship tension is provided by a local bartender that Jaye is attracted to, but to whom she seems unable to admit the attraction, much less make a commitment to.

As the story continues, Jaye finds herself under increasing stress as she struggles to deal with the often bizarre commands that she seems compelled to follow and the cascade of events she unwittingly touches off.

The Fox network aired four one-hour episodes of the series before cancelling it, though thirteen episodes had been completed. Tim Minear, one of Joss Whedon's co-creators on Angel, wrote and executively produced, ensuring snappy post-modern dialogue and convoluted plots.

The show's creator, Bryan Fuller, also created Dead Like Me, which may explain some of the similarities between the two shows; for example, the slacker female protagonist with a traditionally male name stuck in a dead-end job. (Fuller went on to create Pushing Daisies, starring Lee "Aaron Tyler" Pace alongside a female with a traditionally male name.) A series arc of sorts was planned; the second season was to focus on Jaye's sessions with her therapist, and the third was to have had Jaye committed to an institution. The show also shares characteristics with Joan of Arcadia, which premiered a few months earlier, as it is (very loosely) based upon the Joan of Arc legend.

Many people missed its broadcast run, being unable to figure out when it was on (a fate that befell far too many genre shows on Fox in the 2000s). It still managed to scrounge up a few fans, though, who petitioned to get a DVD set, which collects all 13 episodes.