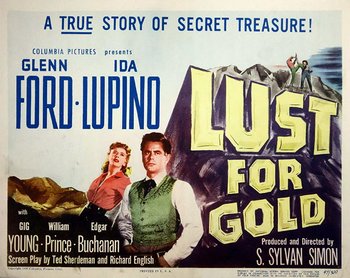 Lust for Gold is a 1949 American Western film directed by S. Sylvan Simon and starring Ida Lupino and Glenn Ford. The film is about the legendary Lost Dutchman gold mine, starring Ford as the "Dutchman" and Lupino as the woman he loves. The historical events are seen through a framing device set in the contemporary 1940s. It was based on the book Thunder God's Gold by Barry Storm.

In the present, Barry Storm travels to Superstition Mountain, claiming he is a descendant of the original ‘Dutchman’, the German migrant Jakob Walz. Storm is involved in a shooting on the mountain and encounters the local sheriff and his men. With what the sheriff tells him and further research in newspaper archives of the 1880s and talking to elderly locals he pieces together a possible scenario – which leads into the flashback. Walz finds the original mine and murders his partner, then hits town where Ida Lupino is Julia Thomas, from a German family in Milwaukee and who runs a small bakery shop. Julia is married to the spineless Pete (Gig Young) but she sees an opportunity to seduce Jakob and find the gold for herself. It’s a risky business as the whole town knows about the find. What follows is a classic Western melodrama which ends in disaster and takes us back to the present where Barry Storm becomes involved in a typical Hollywood ‘resolution’ that maintains the integrity of the ‘lost gold’.

Tropes used in Lust for Gold: