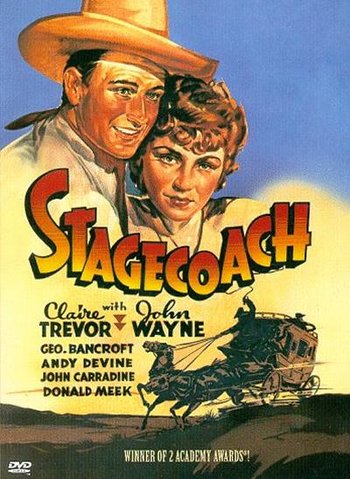 "Well, there are some things a man just can't run away from."
— The Ringo Kid
Advertisement:

Stagecoach is a classic 1939 Western directed by the legendary John Ford, notable as the Star-Making Role for the even more legendary John Wayne.note The Big Trail in 1930 was actually his first major role, but it bombed and he spent the next decade making B-movies.

Set in 1880, the story involves a disparate group of strangers — including prostitute Dallas (Claire Trevor), alcoholic Doc Boone (Thomas Mitchell), Southern gambler Hatfield (John Carradine), pregnant army wife Lucy Mallory (Louise Platt), marshal Curley Wilcox (George Bancroft), escaped outlaw the Ringo Kid (Wayne), and others — who all wind up traveling on the same stagecoach from Tonto, Arizona Territory to Lordsburg, New Mexico Territory. Besides having their own secrets, burdens, and crimes to deal with, the passengers have to worry about Geronimo and the Apaches, who are on the warpath.

John Wayne had previously appeared in some 80 "B" pictures; most studio executives were vehemently opposed to giving him top billing in a major film, but Ford (whose first sound Western this was to be) insisted on casting Wayne as the Ringo Kid. (Notably, the actor was paid far less than any of his co-stars except for Carradine.) Ford, well known for abusing his cast and crew, reportedly brutalized Wayne to screw an effective performance out of him — and succeeded. This film also marked the first time that Ford would shoot in Monument Valley, Utah, the site that would become his favorite setting and almost a trademark of his films.

The film was remade in 1966 by director Gavin Douglas, with Alex Cord replacing Wayne as the Ringo Kid, Bing Crosby as Doc Boone, Red Buttons as Peacock, Stephanie Powers as Mrs. Mallory, Mike Connors as Hatfield, Robert Cummings as Gatewood, Van Heflin as Curley, Slim Pickens as Buck, and Ann-Margret as Dallas. Despite an improved script (the Gatewood subplot is particularly satisfyingly tied in to the Ringo plot, with Keenan Wynn's delightfully nasty Luke Plummer being fatally hired by the defaulting banker) and a remarkably strong showing by Crosby, the film is killed dead by Cord's leaden performance. Ultimately the most memorable aspects of this remake are the in-character portraits of the main cast done by Norman Rockwell, used for the closing credits

and poster art. (Rockwell also had a brief cameo in the film itself as a poker player.)

The story was redone once more in 1986 as a Made-for-TV Movie, starring Kris Kristofferson as the Ringo Kid, Willie Nelson as Doc (Holliday instead of Boone), Johnny Cash as Curley, Waylon Jennings as Hatfield, and John Schneider as Buck.

Many decades later, two brothers who were fans of this movie would be inspired to write their own "survivors escape from Hellish Wilderness" story, complete with a sympathetic criminal and a bounty hunter in place of a Marshal. The rest, as they say, is History.