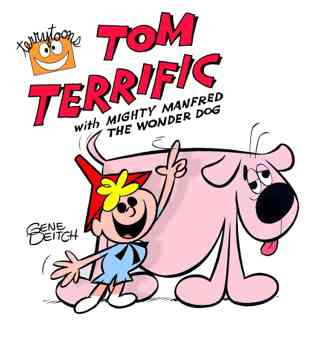 Tom Terrific was one of the early stars of American television animation. He was created in 1957 by Gene Deitch, and served as the hero, with his canine sidekick, Manfred the Wonder Dog, in a series of five-minute shorts produced by Terrytoons for CBS. The shorts were broadcast as part of the long-running Captain Kangaroo show. Each short served as part of a weekly storyline. Twenty-six such storylines ("episodes") had been completed when production ended in 1958. That is 130 five-minute shorts. They were regularly broadcast until 1961, and received reruns over the following years.

The story of Tom actually began a couple of years earlier, in 1955 to be exact, when Deitch created his own comic strip, ''Terr'ble Thompson". The eponymous hero, Thaddeus "Terr'ble" Thompson, was a 7½-year-old boy who spent much of his time in his treehouse. There, famous historical figures would come seeking his help. He joined them in their time period and helped resolve their problems. While his mother and other boys would scoff at his adventures as make-believe, Thaddeus would be running around with the likes of Christopher Columbus and George Washington. It was left to the reader to decide whether the tales were real or not. Maybe Magic, Maybe Mundane. The strip only lasted from October, 1955 to April, 1956. Deitch had trouble with a rather hectic schedule, serving as an artistic director at UPA animation studio, sole creator of a daily strip, and a family man at the same time. He decided to drop the comic strip.

A year later, serving at Terrytoons, Deitch decided to rework the "boy hero" concept into a new animated character. The result was Tom Terrific. There were a number of key differences between the two series. Gone was the time travel aspect, Tom would only have adventures set in the present (the exception being "Go West, Young Manfred"—Tom turned himself into a clock, and with Manfred went backwards in time to the California gold rush). Also gone was the notion of parents. Tom actually lived in his treehouse and the only adults in his life were his opponents. More importantly, Tom had superpowers. He had a Transformation Trinket, a funnel-shaped hat, which allowed him to transform into any form, a power needed to solve problems and save the day. As his theme song went “If you see a plane on high/A diesel train go roaring by/A bumblebee, or a tree/It’s me!” The only limit to his power seemed to be the limit of his creativity.

Tom was constantly accompanied by his sidekick, Mighty Manfred the Wonder Dog. Manfred was a Talking Animal, but actually had no skills to speak of. He was a rather lazy dog with a big appetite. When not sleeping or eating, Manfred would only offer some random comments on the plot of the week, but Tom took them as genuine suggestions and came up with his own ideas, which he would attribute to Manfred. The other characters of the series were its villains, most notably Tom's Arch-Enemy, Crabby Appleton, an adult man, "rotten to the core", whose motivation for causing trouble was really simple. "I'm fond of gloom, impending doom/I think good deeds are sappy!/I laugh with glee, it pleases me/when everyone's unhappy." Other foes included Isotope Feeney, Sweet Tooth Sam, Captain Kidney Bean, The Silly Sandman, etc.

Drawn in a "simple black-and-white drawing style with minimal backgrounds", the series was not noted for its lavish animation but, rather, for its imaginative scripts and tongue-in-cheek approach to storytelling which made it a favorite for many Baby Boomers. Even today, the character has some presence online with fans seeking out old episodes and conversing over their fond memories of it. The character briefly headlined his own comic book series in 1957 to 1958, but only six issues were ever published. His comic book stories were less fondly remembered. Most comic book histories simply mention that some of them were drawn by novice Ralph Bakshi.

Tom Terrific made an appearance in the unsuccessful Curbside pilot, where the Mighty Mouse segment had Mighty try to defend Tom from a criminal called the Creeper.

Tropes Related to this series:

Tom. That was a great adventure! Manfred, you're terrific!
Manfred. No, you're Terrific. I'm Manfred.