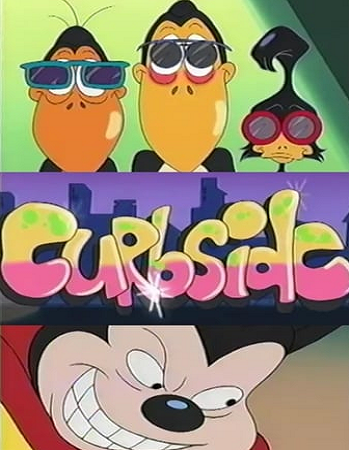 Curbside was an unsuccessful pilot created by Nickelodeon in 1999. It was an Animated Anthology focusing on revamped versions of Terrytoons characters, the framing device consisting of a talk show hosted by Heckle and Jeckle.
Advertisement:

The main story's plot consisted of Heckle and Jeckle falling victim to a cursed scarecrow, with three segments set between this conflict consisting of Deputy Dawg and Muskie Muskrat trying to arrest Vincent Van Gopher, Sidney the Elephant being tasked with protecting the jungle from a giant rock about to fall, and Mighty Mouse making sure no one threatens his buddy Tom Terrific.

Tropes present in this pilot: