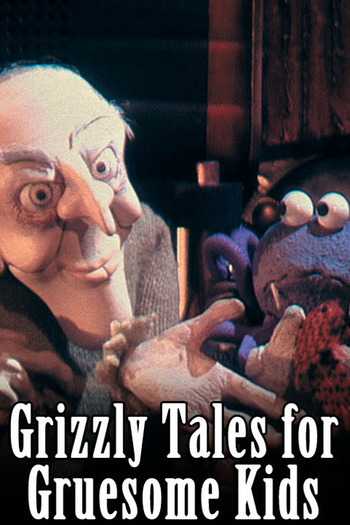 "You are welcomed to Grizzly Tales for Gruesome Kids, a series of cautionary tales for lovers of squeam!"
Opening Narration
Advertisement:

Based on a children's book series of the same name by Jamie Rix, Grizzly Tales for Gruesome Kids is a British Nightmare Fuelled Space Whale Aesop animated series, narrated by the host Nigel Planer (best known for starring in The Young Ones). The series began in 2000 and ended in 2006 but was later revived briefly in 2011 for two seasons. Think Tales from the Crypt for CITV.

Planer stars as Uncle Grizzly, the caretaker of a rundown cinema (the Squeam Screen) which serves insects for refreshments. He screens short movies into the theatre of stories about children that are punished for their behaviour. The kids in question are usually greedy, naughty, rude, obnoxious, and selfish, and are usually taught a "grizzly" lesson by the end of the tale — often ending with them being killed, mutilated, shape-shifting or, if they're lucky, learning the error of their ways and changing for the better.

In between these stories, Uncle Grizzly will talk to the children watching about the lessons that they'll learn from the movie he's about to broadcast, often with a pet spider called Spindleshanks, that he often enjoys pranking or abusing as the spider acts confused or acts accordingly. These segments later disappeared as the show progressed, most likely because the Art Shift from the stop-motion intros to the 2D animated movies were expensive and time-consuming to deal with.

When a new series returned after a four-year hiatus (retitled Grizzly Tales — Cautionary Tales for Lovers of Squeam), the introductions were relocated to the HotHell, a 3D CGI hotel that implied links to the underworld. Although Planer remained as the host, the storyteller was now Uncle Grizzly's half-brother, The Night Night Porter, and the stories were still 2D animated but in an updated art style. For some long-time viewers, this new update wasn't received well, which might have contributed to the show's abrupt end.note Not helping that the CITV show was constantly re-aired across several children's channels...