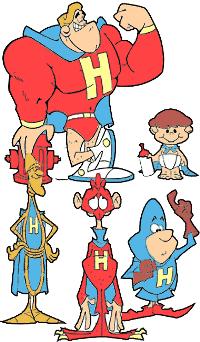 The Mighty Heroes is a lighthearted Super Hero Parody cartoon that originally aired on CBS in 1966, reportedly created on-the-spot by animator Ralph Bakshi. The show featured a team of five misfit heroes — Strong Man, Cuckoo Man, Diaper Man, Rope Man and Tornado Man — protectors of the city of Good Haven. The show featured a fair amount of skewering of superhero tropes, and is seen by some as a precursor to Bakshi's work on Mighty Mouse: The New Adventures (where an aged group of Mighty Heroes guest star in one episode).

Dell Comics published a comic about the characters in 1967; decades later, one-shots with the characters were printed by Marvel Comics and Spotlight Comics. Their last appearence being in 1998, from the now defunct Paramount Comics in attempt to reboot it.

The Mighty Heroes provides examples of: