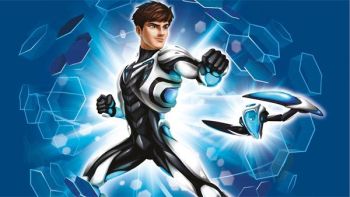 A 2013 Continuity Reboot of the Max Steel franchise, to relaunch it to the international market.note While the original franchise still existed as toys and DTV movies, they were exclusive to the Latin American market. Compared to the espionage/counter-terrorism themes of the old series, this one goes in a new, superhero-influenced direction.
Advertisement:

Young Max McGrath moves into a new town with his mother. He quickly finds out that his body generates TURBO energy - an extremely potent energy source, which he cannot control... until he meets Steel, an alien entity known as an UltraLink, and who needs TURBO Energy to survive. Together, they become the titular Max Steel and face the forces of Miles Dredd, the evil leader of Trans Human Industries, who wants to acquire all possible sources of the TURBO energy for himself... by any means necessary.

After the shows initial 2 season run, a series of MFT Movies were made that continues the story.note  Made exclusively for Latin America. A live-action movie adaptation was also released on October 14, 2016.