Maxwell and Steel
The protagonist of the show. A normal teenager, who upon moving to a new town finds out is able to generate and control Tachyon Unlimited Radiate Bio-Optimized (or TURBO) energy.
Advertisement:
Steel
Full Designation: N'Baro Akstteel X377
Voiced by: Samuel Vincent

A diminutive alien robot, known as an Ultralink. He is only able to function on TURBO Energy, without it he will permanently shutdown.

Alejandro "Alex" Villar
Voiced by: Adrian Petriw
A skilled soccer player and a member of Max's Team Turbo. Alex grew up as a only child and was raised by his grandmother in downtown Copper Canyon. His alter ego is La Fiera and his modes are animal-themed.
Rayne Martinez
Voiced by: Lili Beaudoin
Berto's younger sister and a member of Max's Team Turbo. She is often referred as "Little Thunder" by her brother. Her alter ego is Tempestra and her modes are weather-themed.
C.Y.T.R.O.
Voiced by: Colin Murdock
A battle android created by Berto. During the events of the Team Turbo movie, C.Y.T.R.O. gains his own conscience and eventually becomes a part of Max's Team Turbo.
Advertisement:

The bully on Copper Canyon High School. In My Best Friend is an Ultralink, Butch befriends Max, Sydney and Kirby and becomes best friends with Kirby.

Commander of N-Tek and Max's uncle.

Jefferson Smith
A highly respected N-Tek agent.
Katherine "Kat" Ryan
The highest ranking female N-Tek agent. She is proficient at xenobiology, as well as medicine, and is a skilled fighter in both hand-to-hand combat and long range.
Parker
Formerly a Major in the army under Colonel Castle. He joins N-Tek after finding out that Castle was working for Dredd and warning them. He is in charge of N-Tek's underwater base in the South Pacific.
T.J.
The A.I. of the Turbo Jet
James "Jim" McGrath/Ja'em Mk'rah
Max's father and Molly's husband. Was Steel's previous partner. He died when Dredd sabotaged the TURBO Star.

He is an alien from the planet Tachyon, thus his son is an Half-Human Hybrid. 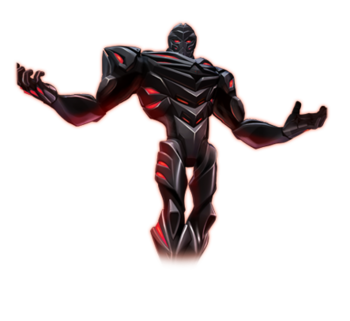 Former employee of N-Tek, Miles saw nothing but profit in Steel and TURBO Energy. As such, he created a TURBO Energy siphoning device. But it backfired, and wound up implanted in his chest. He now needs TURBO Energy to survive.
Jason Naught
Voiced by: Brian Dobson

The (former)executive of Trans Human Industries aka THI, he functions as the face of the company. Very wily and eccentric, he is The Dragon to Miles Dredd. He tries to present an air of control and confidence, but the truth is he's more a bumbling minion and verbal chew toy to Dredd.
Dr. Tytus Octavius Xander/Toxzon
Voiced by: Andrew Francis
I gave them my genius, and this is how they repay me? Unconscionable! They haven't heard the last of Tytus Octavius Xander. They haven't heard the last... of Toxzon! 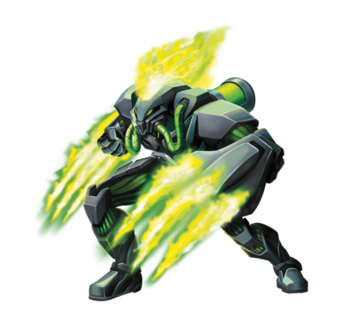 Formerly an environmental researcher at THI, Dr. Xander was searching for a way to eliminate pollution from the world. Somewhere along the line, his sanity began to decay, to where he even held conversations with his plastic goldfish. Eventually this got him fired from THI. When he tried to poison the employees in retaliation, a confrontation with Max Steel caused him to fall into a vat of toxic waste, mutating him into the villain Toxzon, a mutant with the ability to manipulate various toxins. He now seeks revenge against Max Steel.
Troy Winter/Extroyer
Voiced by: Brian Drummond
I am vengeance... I am destruction... I AM EXTROYER!! 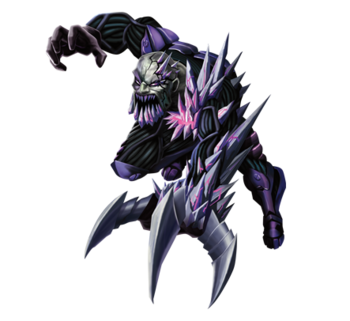 Formerly known as Troy Winter, he was a criminal hired by Dredd to steal pieces of an UltraLink from N-Tek and THI. He attempted to double-cross Dredd, but Dredd was prepared and had a bomb in the UltraLink. The resulting explosion bonded the UltraLink to his body, transforming him into the beastly Extroyer and granting him the ability to turn into any animal he wants by extracting their DNA.
Morphos
Voiced by: Brian Dobson 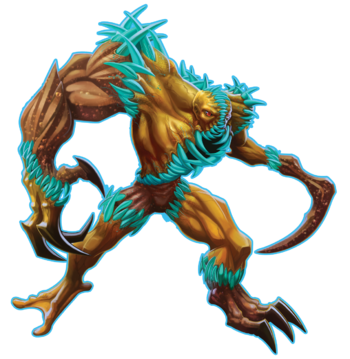 A monster originally designed by N-Tek to defeat Makino, but once they realized he was just too powerful, they decided to cancel it. In the future, nonetheless, Miles Dread, Max's arch-nemesis, creates Morphos using his DNA, but the monster ultimately rebels against his own creator and now he constantly tries to prove that he is the most powerful villain that ever existed. He debuted in Dawn of Morphos.
Professor Mortum
Voiced by: Scott McNeil

A former scientist with a great fear of death, Mortum seeked Connect-Tek, a device capable of creating everything he could ever think of. Thanks to Max, the device is damaged and Connect-Tek explodes on Mortum's face and transforms him into a terryfing techno-zombie with a hunger for brainwaves. 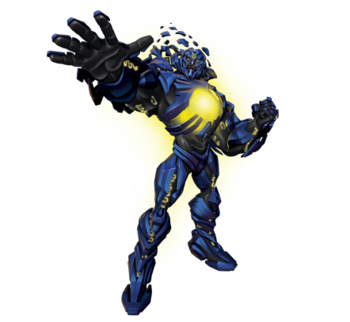 The leader and controlling force behind the UltraLinks. A Galactic Conqueror who seeks to make Planet Earth his new homeworld.
Ultralinks
The lethal symbiotic alien predators who have the ability to bond to and weaponize their hosts by molecular fusion. Capable of transforming anything to everything and everyone they come in contact with into another drone of the Ultralink invasion horde.
Megalinks
The deluxe version of of a typical Ultralink. While their weaker brethren come in the form of tiny techno-organic face huggers, a Mega-Link is a fully autonomous individual roughly humanoid in shape, sporting the bodies of a bipedal sentient entity.
The Elementors/Ultimate Elementor
Voiced by: Andrew Francis (Fire and Air) and Brian Drummond (Earth and Water)
Don't you see? I have all the forces of nature at my command!

A race of Aliens that can control the elements who are allied with Dredd. Hard Water reveals that they are fellow Ultralinks, like Steel.

Ven-Ghan
Voiced by: Giles Panton
An alien bounty hunter who hunts down Ultralinks to bring them to justice for the Council.
Ragnok
Another Alien Bounty hunter in the Black Star Council's employ and Vangan's former Teacher turned nemesis after his employers outed him as a traitor.

Lord Nexus
Voiced by: Charles Zuckermann
The leader of the enigmatic Nexus legion. He plans on deprive humanity's acess to technology, so he would force them to join his society.
Dr. Prometheus Halifax/Terrorax
Voiced by: Mark Oliver 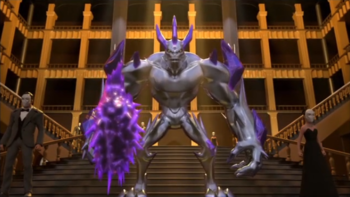 A highly influent member of the Nexus organization and the founder of the Halifax Industries. He led a project to exploit Max's Turbo Energy's real potential, which eventually led to the creation of the Terror Energy. He debuted on Turbo-Charged.
Team Terror 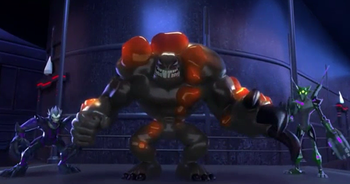 Terrorax's terrible twisted minions!
Team Turbo's evil counterparts. Night Howl is a mechanically enhanced predator, Snare is a assassin robot who is constantly seeking for ways of eliminate the human life and Monstro is an aberration of science that suffers with a genetic metamorphosis.
Nexus Agents 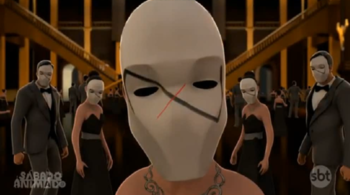 The members of the Nexus legion. All of them wear masks.—

A mysterious alien scientist who was working on floating technology and eventually created Makino, whom was made to absorb and expand. Upon Makino realized his immense power, he bonded with his own creator and killed his assistant and proceeded to start his destructive path through the galaxies.

A one-time character introduced in Team Turbo Fusion Tek. He is the commander of USA's nation forces.

The unnamed mayor of Copper Canyon. Not much is known about him, but he was elected eleven years prior to the series' events.