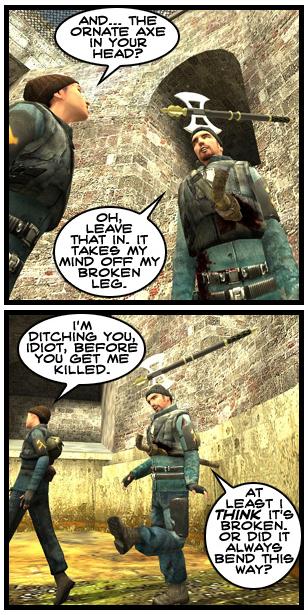 Also note the pipe impaled through his chest.
Harry Paget, Earl of Uxbridge: [calmly] By God, sir... I've lost my leg!
Arthur Wellesley, Duke of Wellington: By God, sir, so you have.
— Waterloo
Advertisement:

In webcomics and cartoons especially, characters in great pain will demonstrate this pain by making frequently deadpan statements, along the lines of "The truck lodged in my stomach is a bit uncomfortable" or some such.

Often justified by the character being resistant to pain in some way or a badass or in speculative works because the character has Bizarre Alien Biology and/or a Healing Factor that means the wound isn't actually as bad for them as it seems. In Real Life, a person might not notice an injury right away due to adrenaline, shock, or panic, all of which can eclipse pain. Often, major injuries damage nerves, so they may not feel any pain. This may be used to make a Mortal Wound Reveal all the more shocking.

Contrast with Minor Injury Overreaction, which is a direct inversion of this trope. Compare Only a Flesh Wound, Belated Injury Realization, I Can Still Fight!, Obviously Not Fine, and Dissonant Serenity.