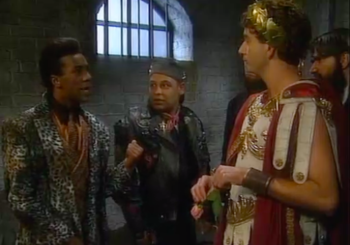 Rasputin, bring in the bucket of soapy frogs and remove his trousers.
Advertisement:

Rimmer is eagerly relating the story of how he defeated one of his training instructors in Risk to Lister and the Cat, obliviously ignoring the fact that both are verbally decrying his story as boring. Luckily for the latter two, Kryten suddenly appears in the room — literally. Blinking across different parts of the room several times, he explains he was investigating the science labs on Z Deck, where he found the plans and incomplete prototype for a matter transporter (or "matter paddle", as it gets dubbed) and then finished assembling it.

Excited at this, if only because it means an excuse to get away from Rimmer's Risk story, the crew all head down to Starbug and discuss what the point of such a device is. Kryten and Holly explain it has a functional range of 500 thousand lightyears, and its scanning system, which allows it to detect S3-class (read: life-supporting) planets, makes it an excellent exploring system. The crew decide to give it a go, but Kryten suggests that he and Rimmer should be sent on ahead as a scouting party first; as a mechanoid and a hologram, they would be unaffected by atmospheric difficulties (non-oxygen atmosphere, temperatures fatal to organic life, etc).

Rimmer protests - not due to his congenital cowardice, as Kryten has already anticipated, but because as a hologram he can't interact with the matter paddle. Kryten and Holly then explain that Rimmer does have a small physical presence as a soft-light hologram; a floating projection unit, called a light-bee, hovers around inside of a hologram to project the image. Holly switches the projection off and Kryten can easily grab the light-bee, showing it to Lister and the Cat. Lister can't resist tossing the light-bee into his mouth and then spitting it out, but Kryten rescues Rimmer before Lister can seriously consider playing squash with it. Explaining that the paddle will be sent back if the planet is human-friendly with programming to bring the second party to the same planet at a slightly different point, Kryten and Rimmer vanish.

They rematerialise upon a lush world, and then send the paddle back after ascertaining it's safe. However, it turns out that they may have been a bit premature when two huge monsters suddenly appear, prompting both artificial sentients to run for their lives.

Unaware of what has befallen their comrades, Lister and Cat promptly teleport to the same planet, and find themselves in the war room of no less than Adolf Hitler, Goebbels and Goering! Lister and the Cat try to use the paddle to escape and believe they have done when they finally materialise in a narrow vertical stone passageway... which turns out to be the chimney of the war room, leading to them being captured and sent to prison.

Meanwhile, Kryten and Rimmer are commenting on how bizarre and improbable the creatures they fled from were; Kryten insists he's seen more realistic dinosaurs given away free in boxes of breakfast cereal. Then, to their surprise, they find themselves being taken captive by Elvis Presley and Pope Gregory!

In prison, Lister and Cat talk about what the Nazis have planned for them, while Lister starts looking out the cell window. As he does, he realises that their captors aren't Nazis - at least, not entirely. He notes that he can see all sorts of historical villains; Al Capone, Benito Mussolini, Richard III, Napoléon Bonaparte, even Rimmer's favorite musician James Last. It's as if all of history's worst people have been gathered into a single place. Then, to his horror, he watches as Winnie the Pooh is led out, tied to a stake and shot by a firing squad. Then the door to their cell opens and Abraham Lincoln is thrown in with them. He then begins to explain this weird world to them...

Back with Kryten and Rimmer, they find themselves brought into an armed bunker and presented with several famous figures; Pythagoras, Albert Einstein, Stan Laurel, Noël Coward, Marilyn Monroe... They promptly ask who Kryten and Rimmer could be, recognizing that they aren't waxdroids like they are. It's explained that this planet is an abandoned waxdroid-populated themepark, the residents of which slowly broke their programming over eons of neglect and have achieved full sentience. However, the villainous character waxdroids launched war on their more peaceful counterparts, and have almost conquered the planet; all of the heroic war-leaders like John Wayne, Sir Lancelot, Horatio Nelson, The Duke of Wellington, Joan of Arc and Doris Day have already been wiped out. Elated by this discovery, Rimmer immediately sets out to take charge of the survivors as their new general, discovering his remaining subordinates also include Jean-Paul Sartre, Santa Claus, Saint Francis of Assisi, Mahatma Gandhi, Mother Teresa, the Dalai Lama and Queen Victoria.

Meanwhile, Honest Abe finishes explaining the situation to Lister and the Cat, concluding that the villain waxdroids' intention is to melt down all the heroes so they can use their wax to create more villainous waxdroids. At that moment, Caligula and Rasputin enter to interrogate the two Dwarfers on how to use the matter paddle. The two manages to trick the two waxdroids into teleporting into a nearby cupboard, then escape with Lincoln, who leads them to the heroic waxdroid bunker. Unfortunately, Elvis takes them prisoner and presents them to Rimmer.

Rimmer is growing increasingly mad with power, and doesn't react well to Lister's criticisms of his efforts at being a general. Finally, he orders Lister and Cat imprisoned and then goes off to lead his grand assault.

The bulk of Rimmer's forces are sent charging across a minefield in full view of the villain command in the middle of the day, resulting in them being wiped out to a droid. Whilst this is going on, Kryten and Queen Victoria are sent to infiltrate the command bunker; the Queen shoots Hitler and his immediate subordinates, but is gunned down by the dying Fuhrer, leaving Kryten to seek out the boiler room and set the planet's temperature to 100 degrees, which causes all of the waxdroids on the planet to melt into lifeless puddles.

Retrieving the matter paddle, Rimmer and Kryten return to release Lister and the Cat, with Lister being highly disgusted with Rimmer — especially because Rimmer sees no problem at all with what he's done. Finally, Lister commands that Holly deactivate Rimmer's light-bee, which he swallows before he, Kryten and the Cat return to Red Dwarf.

Example of:
Variations on a Theme Song