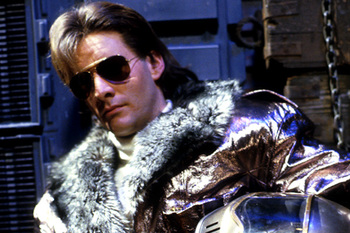 Smoke me a kipper, I'll be back for breakfast
Airdate: 14 March 1991.
Advertisement:

On Jupiter's moon Io, a young Arnold J. Rimmer is told from his mother that he is running the risk of being held back a year in school. According to her, this could damage his chances of getting into the Space Corps and becoming a test pilot.

Cut to twenty years later. Having just completed a test flight, Arnold "Ace" Rimmer is given a hero's welcome. He is charming, good looking, intelligent, brave, and quite modest, preferring the engineering lads (such as Spanners) to the officers. He even gets sexual offers from his secretary, Mellie, and his boss, Bongo (who is male; Ace proclaims that he is "butter side up"). Bongo tells Ace that there is an opportunity to fly a dimension jumping prototype spacecraft. Ace takes him up on the offer, despite being told that there is no coming back. He bids farewell to the space corps ("Smoke me a kipper; I'll be back for breakfast!") before taking off into the big black into another dimension.

In the other dimension, Lister, the Cat, and Kryten fail in their plans to escape Rimmer and go on a fishing holiday when Rimmer wakes up, and begins complaining about how much people hate him. Failing to talk their way out of it, Lister is forced to take him along. Rimmer immediately begins acting annoying on the trip, nagging Kryten on his piloting (then complaining that Kryten is a front-seat driver), mentioning his Hammond Organ CDs, and singing campfire tunes. As he is singing "Kumbaya", a purple alert comes on, alerting the crew that a dimensional disturbance is fast approaching.

Ace's ship leaves the disturbance and crashes into Starbug. Starbug crashes on a watery planet, damaging the engine and injuring the Cat. Ace lands on the planet, and helps repair the Starbug engine. Ace and Arnold instantly take a mutual dislike to each other, while Lister and Ace become fast friends. Cat is operated on by Ace, and the ship is back to normal. However, Arnold is complaining that Ace had all of the breaks, giving him an advantage, and calling Ace and Lister a couple due to their friendly interactions. Lister, on the other hand, is happy that he has a successful counterpart, Spanners.

Ace decides to leave the Boys from the Dwarf, because he could not stand to see their Rimmer being as pathetic as he is. Before he leaves, he reveals what the break that Arnold talking about was: Ace was held back a year. The humiliation was enough to make him learn to fight back and keep on trying. Arnold, meanwhile, managed to squeak through, never learned anything, and kept on making excuses for his failings (his parents, for example), leading him to advance as far as second technician (just one rank above lowest-ranking Lister), and eventually dying in an incident partially caused by him.

Ace sets off to find a more irritating Rimmer then the one he just encountered. According to an ending scroll, he did not find any other incarnation of Rimmer as pathetic as the one he met aboard Red Dwarf.

Tropes present in this episode include;

Example of:
Even the Guys Want Him