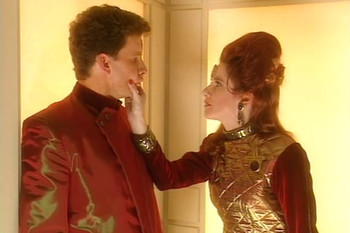 Underneath all that neurotic mess is someone nice trying to get out. Someone who deserves a chance to grow.
After a sappy film that leaves Lister chewing his hair in sadness, Rimmer goes on a rant about how unrealistic it is for any man to give up his career just because he loved a woman (and calls Jesus' life of healing the poor similarly absurd). Then a bunch of weird lights surround Rimmer and whisk him away.
Advertisement:

It turns out they've been found by the holoship Enlightenment, sent to the stars long ago to explore, and crewed entirely by hyperintelligent holograms. Rimmer is shown around by Commander Nirvanah Crane (Jane Horrocks) and immediately wants to join, though the chances of a failed engineer whose main skill is unblocking vending machines are low. Since sex is a completely casual activity aboard the holoship, Crane invites him to her quarters. The experience turns out more emotional than she expects.

The captain informs Rimmer that the only way aboard is through dead man's boots—he'll have to challenge an existing crew member in a contest of intelligence. Desperate, Rimmer has Kryten give him a "mind-patch" with another, smarter crew member's holodisc. He gets his IQ boost (at the cost of any semblence of a normal personality), but it falls apart halfway through. Even so, he wins... because his opponent was Crane, who took herself out so that he could have his dream. After an unmoving speech to Lister, Kryten, and Cat, Rimmer departs.

Rimmer is shocked when he finds out what happened, and despite being the self-centered, ambitious smeghead he is, he decides that he can't stay aboard the ship knowing that a woman he loved gave up everything for him. The captain is incredulous, since not only is Rimmer giving up a new life, he won't even be with Crane. But that's all right, because they won't be apart... they just won't be together.

Example of:
Ranked by I.Q.