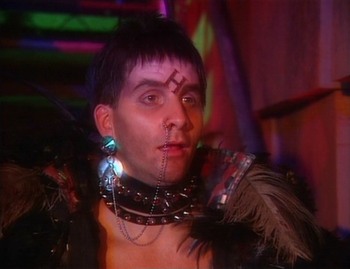 I want to hurt you.
Lister and Kryten are running an experiment with the matter paddle device used back in "Meltdown" which can produce two duplicates of whatever its beam is projected on. While testing it out on a strawberry, though, they find the duplicates aren't quite the same as the original: one is delicious and the other infested with maggots. Trying to tinker with the device inadvertently causes a chain reaction that results in Red Dwarf exploding minutes after the crew make an emergency evacuation in Starbug.
Advertisement:

As they're scanning the wreckage for salvageable material the boys are in for a surprise: nearby are two other Red Dwarves, produced by the malfunction with the matter paddle. Although initially excited at having not only their ship back but one that should be even better than the original, Lister points out they still haven't perfected the process and the duplicates would fade away after about an hour. They board the "high" ship to find the device and use it to reintegrate the two copies into the original Red Dwarf.

They soon find that not has the ship been copied, but so have the crew themselves: the "high" versions of the crew are monk-like individuals who devote their time toward philosophy, poetry and the arts. Kryten finds the matter paddle of the high ship but only half of it; the rest must be on the other "low" ship.

In the dilapidated wreck that is the other ship the "high" crew are picked off by the sleazy, degenerate "low" versions of the crew. The real ones are separated in the chaos and Lister is fixed with an implant that lets the "lows" control his movements. He kills the high versions of himself and Rimmer before going after the real crew but is stopped short when Cat kicks him in the groin. They manage to recombine the two versions of Red Dwarf into the original, but Lister accidentally sits on the implant again, with Cat asking for just one week of him as a remote-controlled plaything.

The episode contains examples of: