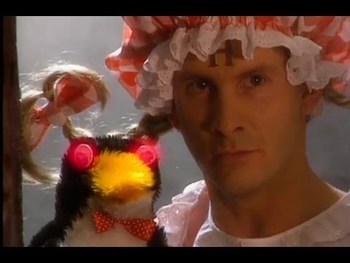 Mr. Flibble's VERY cross.
The boys from the Dwarf are exploring an icy planet, having found a scientific outpost there. Rimmer's attempts at getting Lister and the Cat to do as he says are going nowhere, with them deferring to Kryten instead. Since the only sciencist there is a hologram, Kryten insists Rimmer go back to the Dwarf, since Holly can only generate one hologram at a time. Kryten's use of the Space Corps Directives has Rimmer asking if these legendary rules even exist, so Holly gives him the rule-book as the others leave.
Advertisement:

On arrival at the lab, it's not a good sight. There are signs warning about horrible death and disease, but fortunately the scanner says they're going to live. Eventually. After a good several seconds. They soon stumble upon a stasis tube containing one Doctor Hildegard Langstrom, who is obviously not herself. As is pretty normal by now, she attacks the trio (though mercifully her Eye Beams don't have good aim), and hijacks the radio to tell Rimmer that she is quite, quite mad.

Soon enough, however, the virus she's infected with causes her to die. The boys go back to Red Dwarf, having taken some samples of Langstrom's research from before she went mad, about "positive" virus, including ones that induce joy, and even a distilled version of luck itself. As they get close to the ship, Holly has some alarming news. Starbug is being directed toward the quarantine docking bay. Rimmer claims he's just making sure the trio haven't come down with anything. They obviously haven't, but Rimmer insists on playing everything absolutely by the book. This means leaving them in quarantine for months. It gets worse on arrival. There's only one bunk, because neither the Cat or Kryten are Jupiter Mining Corps crewmembers. In terms of entertainment, Rimmer's supplied them a filled-in crossword, a Chess set with 31 missing pieces, a knitting magazine, a wallpapering video, and constantly looping tango music. And for breakfast, lunch and dinner, it's sprouts, despite sprouts making Lister sick.

Lister rallies Kryten and the Cat, figuring Rimmer is using the rulebook to make their lives living hell and make them turn on one another. So, as the Boys From The Dwarf, they vow not to let it get to them.

Five days later, and things aren't going well. The Cat's arm is broken, Lister's got a swollen eye, and Kryten's had to spend two hours bashing his head back into shape. Lister is trying to maintain a positive attitude, but Kryten and the Cat are at each other's throats, and Lister's constant declarations that they'll "get through this" are really not helping. Things steadily get worse, until Kryten realises that they've been in quarantine for five days, and no-one's crazy. Since Rimmer's playing by the book, they have the excuse they need to get out. They've nailed him!

Then Rimmer makes himself known. And it's immediately obvious that something's... not entirely right with our favourite smeghead. Maybe it's the Creepy Monotone, or is it something else?

He explains how he wants to let the three out, but he can't. The King of the Potato People won't let him. No matter how much he begs. He wants to keep them in quarantine, for years. Deciding to play along, Lister asks if they can talk to the king. But they'd need a magic carpet. Oh, they've got one. A nice little three-seater.

So they're trying to say they want to use a magic carpet to see the King of the Potato People, and they're telling Rimmer they're completely sane? That sounds like crazy talk, and if there's one thing Rimmer can't stand, it's crazy people. So, the only solution is two hours WOO - With-Out Oxygen. That, Rimmer maintains, will teach 'em to be breadbaskets.

Oh, smeg. The situation looks bleak. They're running out of air, and for some reason Holly's not around to help them (actually, Holly hasn't been seen since they landed, and won't be seen for the rest of the episode, now that we mention it). So what can they do?

Well, how about they use the luck virus to escape? They do, and plan to go to the holo-suite, to try and purge the virus out of Rimmer before he dies. But unfortunately, Rimmer and his puppet friend Mr. Flibble are waiting for them. A dramatic chase occurs, as Rimmer and Mr. Flibble try frying the trio with their hex vision. They manage to outrun the mad hologram, but as they hide, Rimmer uses the virus-granted telepathy to retrieve a fire axe, and toss it at Kryten. Fortunately, as an android, it doesn't do too much, though he does start spouting gibberish, having to smash his head against the wall so he can WIN SELF-DETERMINATION FOR THE SOUTH MOLDAVIAN PEOPLE! A few more rounds of head-bashing fixes the problem.

Of course, all this has given Rimmer (and Mr. Flibble) time to catch up with them. And now an upset Mr. Flibble wants to do something truly hideous to punish them for running away. Nervously backing down the corridor, the boys are doomed. It'd take a miracle to save them. A miracle, or the exact components needed to rig up a device to purge the virus from Rimmer then and there.

And, wouldn't you know it, Lister keeps tripping over them. Cue one virus-purging device, cue one purged Rimmer (and sadly, one "dead" Mr. Flibble). With the virus gone, Rimmer returns to his usual cowardly, weasel-minded self.

But, just to be sure, he's put in quarantine. On waking up, Lister assures Rimmer he won't be alone, because the three of them, all dressed in gingham dresses of their own, are gonna be right there with him.