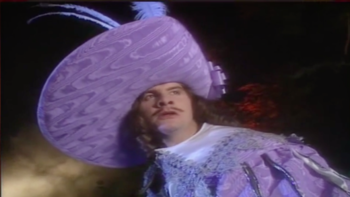 Feel my blade, Loneliness. May your foulness rot in hell!
The episode begins with Kryten badly damaged, amidst the wreck of a shuttle. He can't recall what's happened, because the nearby engines are warping his short-term memory. Also, his short-term memory is damaged, due to the engines, which combined with his lack of short-term memory, has him a little disorientated. With only fifty-seven minutes before the remains go "boom", Kryten cuts off his hand and has it go back to Red Dwarf for help. After a little mishap involving Lister and the Cat mistaking the hand for a very big tarantula, Kryten is found and (mostly) repaired.
Advertisement:

With his memory fixed, Kryten can recall what happened: He and Rimmer had found a moon on a scouting expedition, and Rimmer had claimed it for the Space Corps. As they were celebrating via singing the Space Core anthem, the planet sprang to life, attacked them, and abducted Rimmer. Y'see, the moon is in fact a "Psi-Moon", which reshapes itself based on the minds of those who land there. So naturally Rimmer's neurotic toilet bowl of a mind has turned it into utter hell. All directed at Arnold, who is vulnerable to all this thanks to the moon rendering him solid.

As for Old Ironbutt, he's been dragged off by shadowy, hooded sorts to a temple, where he is to sacrificed to the Unspeakable One. This sacrifice, by the by, involves Rimmer being rendered shirtless and covered in oil by two beautiful, scantily-clad women. The Unspeakable One likes his victims oiled. So much better for conducting electricity, after all.

Now, as much as they may dislike Rimmer, the others aren't going to let him die in horrible, horrible agony, so they trek through the horrific miasma that is Rimmer's psyche, passing through a swamp filled with leeches that look like Rimmer's mom, and a graveyard devoted to all of Rimmer's long deceased positive traits, until they find the temple, and save Rimmer from a poker in unspeakable places. By the time they get back to Starbug, however, Rimmer's self-loathing has returned, which bogs the ship down, giving the Unspeakable One a chance to send his hooded legions after the guys. Kryten quickly determines the only possible chance of escape: Since the moon's awfulness is generated by Rimmer's feelings, they have to make him feel better about himself.

Despite the herculean task this involves, the others put on a brave face and tell Rimmer that actually, they think he's okay. A real great guy. This momentary boost to Rimmer's confidence allows his positive traits to momentarily rise from their graves and fight off the hooded hordes, and Starbug manages to get free. Sussing things out, Rimmer asks if they really do think he's a good guy to get along with.