Literature / Pump Six and Other Stories 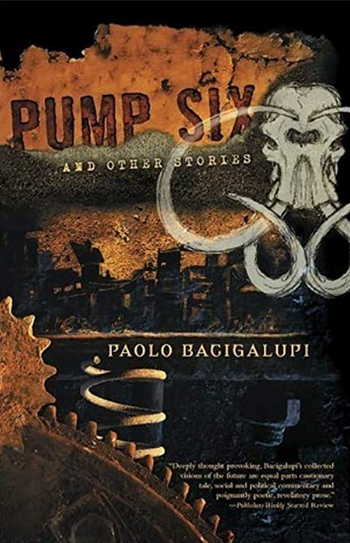 Pump Six and Other Stories is Paolo Bacigalupi's debut collection of short stories. It's full of social criticism, political parables and environmental advocacy, while often indulging in extremely black humour.

Almost all stories contained in the collection were at least nominated for prestigious awards in sci-fi literature. With a massive helping of Bio Punk, they feature different but closely related visions of a bleak future, in which Earth is/was ravaged by different kinds of cataclysms or has been taken over by amoral MegaCorps, with a focus on how human society has adapted to the changes and how advances in technology could effectively rob us of our humanity - and nobody would care.

Many of them would be later expanded into full-length books (for example, "Yellow Card Man" and "The Calorie Man" were combined into single setting and recycled into The Windup Girl). "Pop Squad" got an Animated Adaptation with the same title as part of the second season of Love, Death & Robots in May 2021.

Pump Six and Other Stories provides examples of: