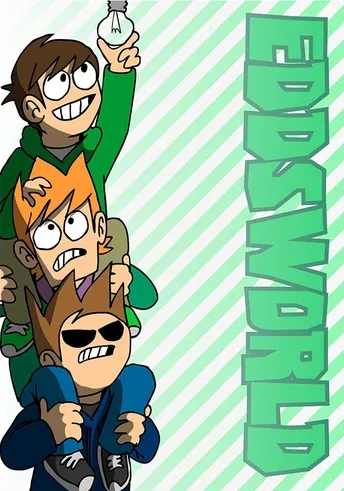 It's Edd's world, we just live in it.note From top to bottom: Edd, Matt and Tom. Not pictured: Tord.
Eddsworld

is a British slapstick-heavy webtoon and webcomic that has been running since 2003. Its Newgrounds page can be found here

and its DeviantArt page containing all of the EW comics can be found here.

"Eddisodes" are released sporadically and follow no real story arc, instead usually following the characters as they get involved in strange adventures including, in no particular order: zombies, evil zombie Santa, mummies, future counterparts, talking lemons, clones, and Canadians, among other things. Hilarity Ensues.

After a long battle with cancer, creator Edd Gould died on March 25, 2012.

His passing sparked a heavy reaction from the animation community, and many works have been made in tribute to him, including a collaboration project between

many major web animators. The final Eddisode voiced and animated by Edd

The show continued afterwards, produced by Tom's voice actor Thomas "TomSka" Ridgewell and animated by various artists, most significantly through Eddsworld: Legacy, a successful fundraiser released almost a week after "Space Face, Part 1" with the purpose of continuing production of the series. (Well, successful aside from the controversy that brewed after there was considerable trouble getting perks out due to the overwhelming demand, with some apparently not getting anything after a year and a half.) The series had some issues picking itself up thereafter following Gould's death, and Tom ultimately stepped down from his title of showrunner following the release of the "The End" (the Grand Finale of Legacy), relinquishing the reins of the series to Gould's family.

, possibly meaning that Edd's world will keep on spinning after all. In 2017, the Eddsworld webcomic was revived, with Matt Hargreaves (the voice of Matt) writing and drawing the strip. On August 1st, 2020, the Eddsworld animations with a new team led by Matt were announced to return along with the launch of a Patreon page

Has a Character sheet.

Not to be confused with another series starring a character named Edd (although he usually goes by Double D instead).

"You ate this pie"

"You ate this pie"