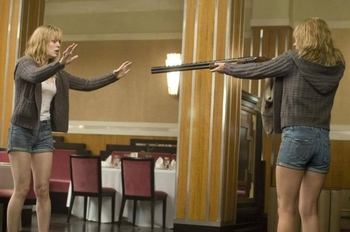 "I am you from the far-off year of 20XX, where cola has been outlawed as a drug all over the globe. After several years, I realized there was only one choice. I had to travel into the past to... [draws gun] kill my past self to spare me from such a grim future!"
— Future Edd, Eddsworld, "WTFuture"
Advertisement:

When you have access to Time Travel, you always risk running into yourself. In some universes this can lead to a lot of problems, but in others the rules are a bit more relaxed. This doesn't mean there aren't any problems though. People change over time, you included, so who's to say that you and yourself would be friends? Who's to say you'd even like each other? Who's to say one of you wouldn't kill the other?

That's where this trope takes effect, when someone murders their past or future self. This could be to spare them from a terrible future, or maybe to stop you post Face–Heel Turn. Or maybe simply because I Hate Past Me.

Sister trope to Killing Your Alternate Self. This action may result in a Stable Time Loop if the past kills the future, or a Temporal Paradox if the future kills the past. Not to be confused with Grandfather Paradox, where one kills their ancestor, ending their own existence.