Web Animation / Doris & Mary-Anne Are Breaking Out of Prison 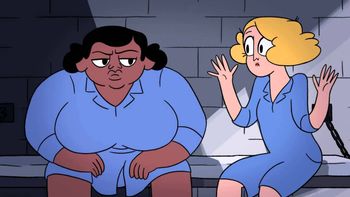 Doris & Mary-Anne Are Breaking Out Of Prison is an animated web-series about two women (Doris and Mary-Anne) in prison during The Roaring '20s. The series was written and directed by Ben Levin and stars Andrée Vermeulen and Diona Reasonover. The series consists of ten episodes. The series can be found here

. The show's official tumblr is here and features some behind-the-scenes information.