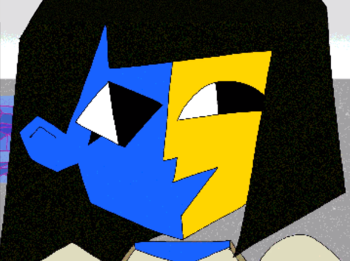 ENA is a series of videos created by Joel Guerra

. They center around the life of ENA, a girl with an asymmetrical body and two different personalities. The only other recurring character besides ENA herself is Moony, ENA's friend who happens to have a body reminiscent of a crescent moon.

ENA's world is very surreal and dreamlike, and the videos reflect this, presenting itself as a sort of fake "game" that is being played, inspired by and frequently compared to LSD: Dream Emulator.

Days after "Temptation Stairway" was uploaded on YouTube, Joel announced that ENA will continue in the future

has been released for the first episode of season 2, to be entitled "Dream BBQ".

On September 22, 2021, Joel announced that "Dream BBQ" will not actually be a cartoon at all, but a free Adventure Game for PC. A trailer

can be seen here. The game is set to release at a later date.

Salutations Tropes relating to ENA: May I please enter?:

The worst day of my life

ENA suddenly loses it while heading to the Auction with Moony

The worst day of my life

ENA suddenly loses it while heading to the Auction with Moony