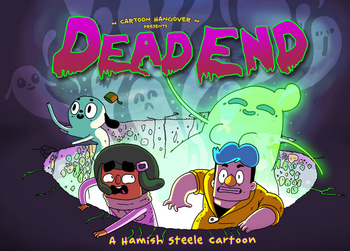 Dead End is a web cartoon

created by Hamish Steele. It was released on Cartoon Hangover on June 26, 2014. It can be viewed on YouTube

When Barney, Norma, and Pugsley move into a house on Morningwood Road, it turns out to be haunted, and a ghost named Pauline takes over Barney's body and traps him in the internet. Barney must find a way to escape the internet and get his body back.

With the original pilot having been a failure, the series has since been Retooled into the webcomic/graphic novel series DeadEndia, which in turn became the basis for the Netflix show Dead End: Paranormal Park.

Not to be confused with the 2003 French horror film of the same name, or the 1937 Humphrey Bogart film.