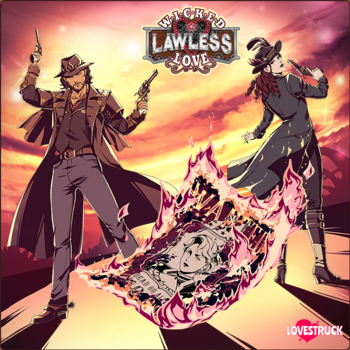 You were born wicked...
Advertisement:

Wicked Lawless Love is a Romance Game Visual Novel by Voltage Entertainment USA, released through their Lovestruck app for iOS and Android devices. It debuted as a pilot in January 2020 with two available routes, and was confirmed for a full series in late February.

The story takes place on an alternate world, in a setting not unlike the American Old West. The heroine, an outlaw from the big city of New Amster, has fled west into the remote reaches of the Sono Territory, home to the town of Wisp Willow.

Out on the frontier, there's much to discover. A world of the supernatural living right under humanity's nose. The Ward, a secretive organization that tasks itself with the watching of said Otherworld. Her own true nature, the key to the streak of bad luck that follows her everywhere.

And in the midst of it all, a romance that pulls her deeper into the world of the unknown.