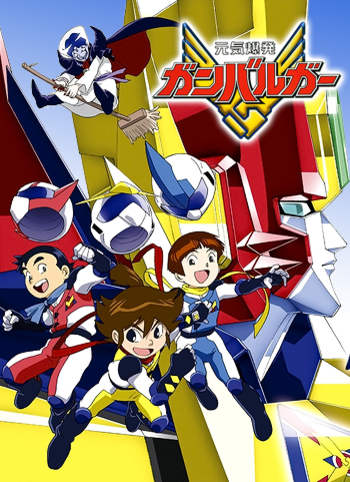 Genki Bakuhatsu Ganbaruger is a Super Robot anime produced by Sunrise and funded by Tomy in 1992. It is the 2nd entry of the Eldoran series, preceded by Zettai Muteki Raijin-Oh.

We start with young troublemaker Kotaro Kirigakure skipping out on ninja training with his father Toubei. Naturally, said father is not pleased with this, causing a father-son spat that ends with Kotaro accidentally breaking a large stone that acted as a seal for Gokuark, one of the rulers of the "Daimakai"note "Great Demon World". Naturally, upon freed, the demon king sets out to wreak havoc.

Or rather, he would if Eldoran, the defender of Earth, wasn't on the scene. He uses his powers to reseal Gokuark, who uses the last of his powers to send out his servant, Yaminorius III. Eldoran, in return, sends out the robot Ganbaruger to chase after him. A battle across the town ensues, causing Ganbaruger to split and vanish.

Later, Kotaro and his friends Rikiya and Yosuke are heading off to play baseball when suddenly, they see a crash. They then go over to find three robots just sitting laying in the middle of the woods. They end up jumping into the robots and get wrist watches that gives them all full-body suits, only for Yaminorius to summon up a "Makaijuu"note "Demon World Beast" to attack the robots. The boys try to run away, only for Kotaro's dad to find them and insist that they fight. Eventually they get around to that, and combine their three machines, reforming Ganbaruger, and take out the Makaijuu. The day is saved!

...for about a minute before Yaminorius shows up again. Kotaro's dad tries to attack him, and gets turned into a dog for his troubles. then tries to do the same to the young trio, but Eldoran's power seemingly protects them. However, before retreating, Yaminorius warns them that his magic is still in effect, and should anybody find out their identities, it will override Eldoran's protection and turn them into dogs.

Thus begins the often-times wacky adventure to defend a small town from the invasion of demons.

See also The Brave of Gold: Goldran of its "big brother" franchise, the Brave Series, by the same creators, as it is similar in that it tells a comedy-focused story of an elementary-aged Freudian Trio, in contrast to most of the other entries in their respective franchise.