We are the ULTIMATE HOT-BLOODED Saurers! 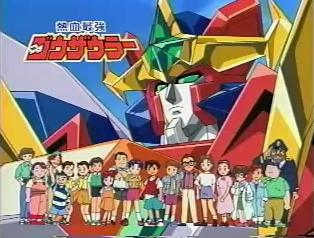 The trappings of a classic Super Robot show: Dinobots, epic hotblooded kid heroes and a Machine Empire. It even has Hot-Blooded right there in the title!
Advertisement:

Produced in 1993 by Sunrise and funded by Tomy as the final part of the Eldoran Trilogy, Nekketsu Saikyo Gosaurer ("Ultimate Hot-Blooded Go-Saurer") starts off like the other parts of the series: A group of elementary school children are selected by the Warrior of Light and Guardian of Earth, Eldoran, to protect Earth from the advances of the Kikaika Empire (or, "Mechanizing Empire"), who seek to mechanize Earth, as they have already done the same to the majority of the Solar System. This time, Eldoran selects an entire classroom of these children and gives them the power of the legendary Dinosaurs in Humongous Mecha form, giving the whole class robots and distinct roles in battle ... while the adults are again pushed to the sidelines and forced to watch as the kids make mincemeat out of The Empire's different bosses and their various assortment of Kikaikajuunote "Mechanized Beast. But it's not easy, as after all, they are sixth-graders that are on the doorsteps of adolescence, and coming-of-age related problems are going to arise and add to their already burdensome task of defending the Earth.

What ensues is not only a very Hot-Blooded Super Robot show, with interesting transformation sequences and brilliant mechanical designs; but a heartwarming coming of age story, with the familiar instances of Lampshade Hanging thrown in for good measure.